There have been a number of the Hooper Oysters build progress updates back in 2012. Then I put it on the shelf and let it sit for almost a decade. I am saying almost because I completed diorama a few months short of 10 years. I am just typing it up in July of 2022.
The main reason for such long procrastination is that I was scared of doing water. There was so much talk of water bubbling, peeling of and so on on the Scott Mason podcast. The painting of it was another factor. I watched Dave Frary paint water on a DVD many times. It didn't seem too difficult, but then I talked to someone who even after seeing the same video found it hard to do. I saw his result and let's say I left me unconvinced it was water.
I made some effort over the years though. I bought some of the figures, painted the others, bought the rock molds, made the diorama base which I ended up modifying later. The original would have had the building parallel to the diorama edges. Then someone showed the interest in the diorama and the rest is a history.
I am not sure how many people read these posts. I guess not many. Most people probably just check the pictures. Anyway, if there is anything on my started kit list that interests you contact me using the contact form. Majority of the projects can be completed fairly quickly and the cost is way below of what you would pay if you hired someone to do the job. All I want is to see these projects done and gone. 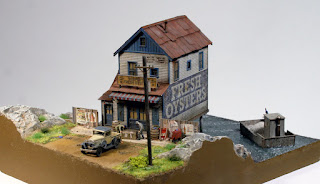 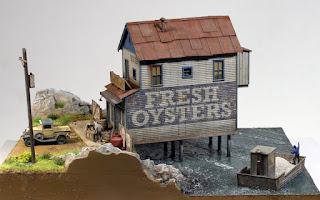 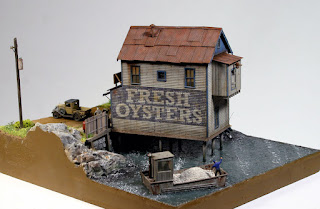 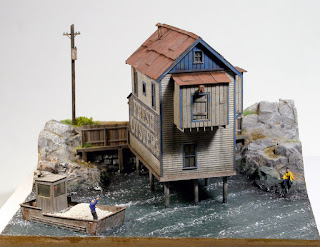 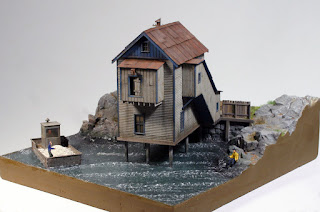 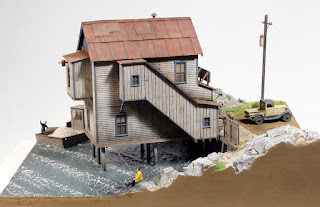 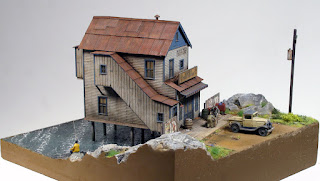 Posted by Vilius Bileisis at 9:00 AM No comments:

After six years on the backburner yet another shelf orphan is done. The majority of changes had been done at the time of posting of the last update. Back then the structure had two large white squares showing. You might wonder as what they were for. Here is the explanation. I wanted it to have additional large windows, but I couldn't cut them myself. Therefore, I made it to appear like there were more windows by adding those squares i.e. window frames, and then the shutters over them. I hope that conveys the message.
The last change since the last post was the roof top sign. The original design didn't have it since it was supposed to be an office. I felt that the restaurant I was converting it to needed one. The name of the establishment has a story behind which I am not going to tell here. It was relevant when I started working on the kit. Over the years the name has lost its relevance, but I kept the sign the way I designed it. 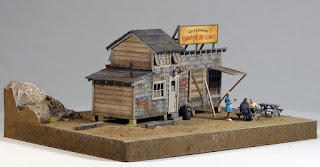 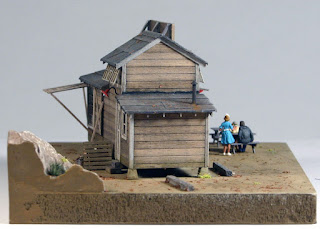 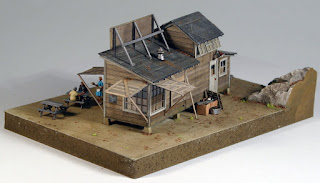 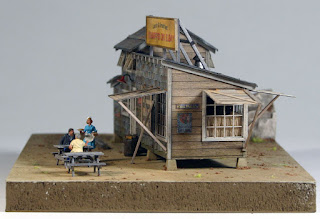 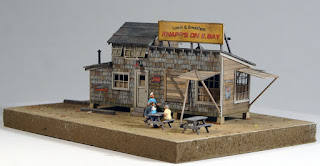 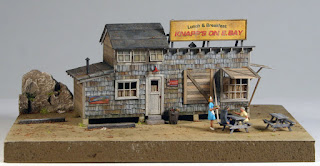 Posted by Vilius Bileisis at 9:00 AM No comments:

I am typing this well after I finished the kit. At the time I completed diorama it had been under construction a few months short of four years. In my last build update I said I had windows upside down. Usually this kind of mistake discourages me and the project gets shelved, but I don't think that was the case with Moscone Bonds. I always remember it having the roof on. For a long time all it needed was the final weathering and getting the scenery done, but I just couldn't make myself to do it.
I thought I used Tichy street signs on some other project before Moscone, but I couldn't find any evidence of that. Maybe I just didn't look hard enough. Anyway, initially I was very skeptical about them. Let's face it, the stop sign is molded in red plastic including the pole it is on and obviously has plastic look to it. However, with some treatment it can be turned into a decent looking street sign. By treatment I mean spraying the sign with Dulcote, painting the pole and the back of the sign, and some weathering. I definitely see myself using more of them going forward. 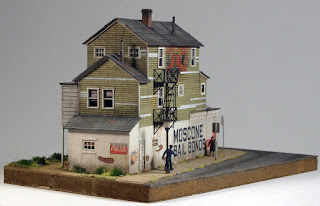 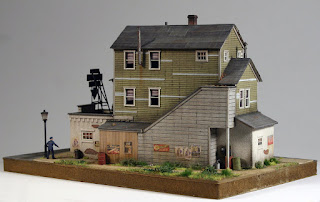 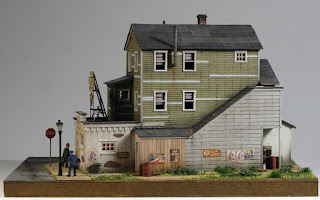 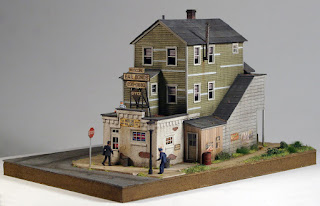 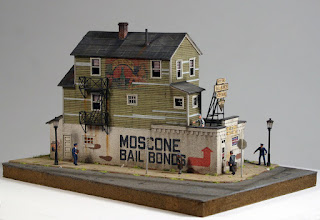 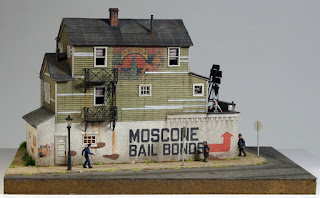 Posted by Vilius Bileisis at 2:56 PM No comments:

The Yard Office #3 was the kit that I didn't consider building. I built the Railroad Kits/Ed Fulasz version of the office a few years back. The addition of the laser cut part just didn't provide enough draw. But then I received a request for one. Well, the interest was for the original version of the office, but at the time only the combo from FOS was available. I needed to separate the brick part from the wooden add-on and build as close to Ed's as possible and then do something with what was left. I changed the roof  line of the wood building a bit, trimmed the height of the walls, dropped the dock, added the missing wall, and set it on a concrete platform. Had I not made the building lower it would have looked oddly high, the entrance door would have been high up in the air for no apparent reason. The freight door would have been up as well, but that could have been somewhat acceptable. Once I lowered the building it looked smaller than its removed Siamese twin. I had to raise it up. Here came the concrete platform to rescue. Both doors had the reason to be high up now. It would have been fine to stop at this point, but I went one step further by adding a hill behind the building to blend in the building into the scenery. Going back to the brick building, I designed and scratch built the entry into it because the original version had one and also because otherwise it would not have had an entrance at all.
I hope this short explanation of why I did what I did will help the readers of this blog with their kitbashing decisions. I have seen quite a few scratch builds and kitbashes that would not be plausible in real life or would be complete engineering failures.

Posted by Vilius Bileisis at 9:00 AM 2 comments:

Back to the regular programming so to speak. I built the Murdock Fasteners kit close to 6 months ago. It was one of FOS kits that had escaped my attention. I am sure once it came out I added it to my mental buy list, but then somehow it got dropped. I realized that only after I received a request to build it.
Murdock Fasteners is a nice little background kit that is easy to build. It has a slight problem though. The left side wall is about 1/16" too narrow. Possibly the trim is supposed to be glued to the far end of it, but the trim isn't shown in the drawings. It is quite possible that there isn't enough 1/16" stripwood included for that extra trim either. Can't remember now. As you may have guessed already the solution was to just glue a piece of trim to the far end of the wall. Other than that I have no other issues to report. 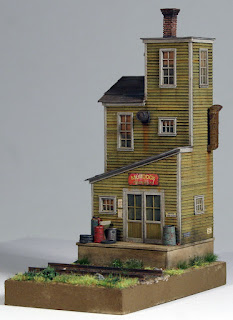 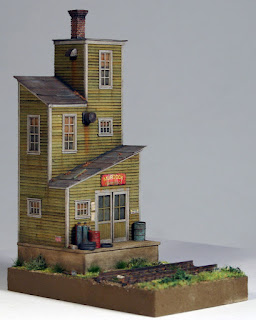 Posted by Vilius Bileisis at 12:46 PM No comments:

Not sure how did it happen, but somehow I skipped one of the dioramas I built last year. Originally the structures I used on it were supposed to be a part of different diorama. However, it was taking way too long to build and I had no problem building a smaller version when asked. I named the Seckler's Marine building after my co-worker who retired around the time I started building the kit. So much respect I had for him back then. By the time I finished the diorama all of it had gone down the drain. Not sure if I should take it as a hint and stop naming the businesses after the people I know and use the movie and show character names instead. Or just use what name the kit creator came up with. 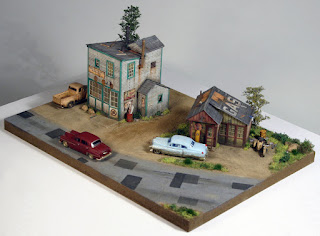 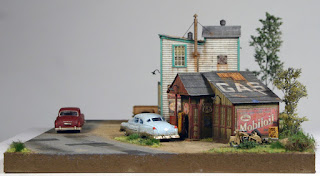 Posted by Vilius Bileisis at 7:51 PM No comments:

I talked about the Green Dragon last time almost five years ago. I can remember exactly when I started it, but I think it was right after I purchased the kit. I would say late 2012 or early 2013. Then it seems I picked it up again in 2017 just put it back on the back burner soon after. I say "it seems" because after about 100 of completed kits it is a little hazy. It is hard to tell when exactly I built or started them. Sometimes I think I built a certain kit two years ago and it turns out to be five.
I don't have much to say about the Green Dragon. There wasn't much left to do really. I could have finished it a long time ago, but it is much harder to pick up again a started kit and a new one. 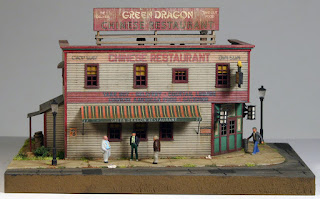 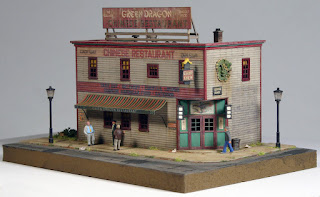 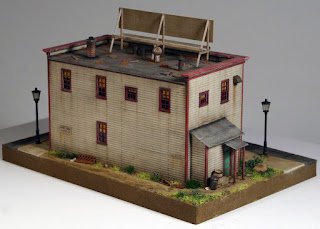 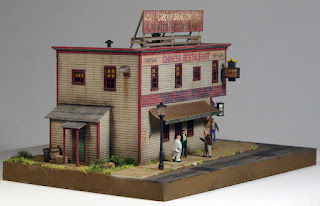 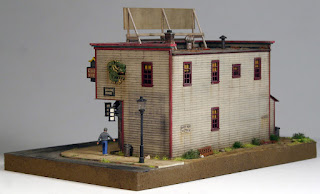 Posted by Vilius Bileisis at 1:55 PM No comments: